Notice : I decided to quit with Oflugur Kennel, because my sims has stopped working and I had to uninstall it. Maybe I will be able to recreate all my dogs, but that isn't sure. I really tried everything to get it to work again, but nothing helped. I hope you understand, thanks for all your help and love and maybe I'll see you in the future. 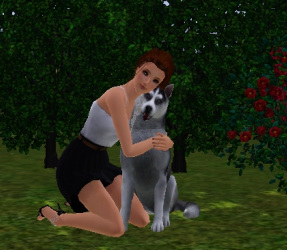 My name is Leah and welcome to my site.

I'm a 23 year old doglover, I like long walks on the beach (so do my dogs :) )
and I like to share my passion for the Siberian Husky.

I recently started this kennel because I wanted to do more then just loving the breed,
I wanted to keep its traits and improve them.

I'm a proud dog owner and have been for whole my life,
I'm hoping I can help you to find your perfect friend.

Huskies are an active, energetic, and resilient breed whose ancestors came from the extremely cold and harsh environment of the Siberian Arctic. Siberian Huskies were bred by the Chukchi of Northeastern Asia to pull heavy loads long distances through difficult conditions. The dogs were imported into Alaska during the Nome Gold Rush and later spread into the United States and Canada. They were initially sent to Alaska and Canada as sled dogs but rapidly acquired the status of family pets and show dogs. Because of their efficiency as a working breed, most huskies are bred to be able to withstand long work days on little amounts of food.


History
The Siberian Husky, Samoyed, and Alaskan Malamute are all breeds directly descended from the original sled dog, which 2004 DNA analysis confirms is one of the oldest breeds of dog. The term "husky" is a corruption of the nickname "Esky" once applied to the Eskimos and subsequently to their dogs.

Breeds descending from the Eskimo dog or Qimmiq  were once found throughout the Northern Hemisphere from Siberia to Canada, Alaska, Greenland, Labrador, and Baffin Island.

With the help of Siberian Huskies, entire tribes of people were able not only to survive, but to push forth into terra incognita. Admiral Robert Peary of the United States Navy was aided by this breed during his expeditions in search of the North Pole.

Dogs from the Anadyr River and surrounding regions were imported into Alaska from 1908 (and for the next two decades) during the gold rush for use as sled dogs, especially in the "All-Alaska Sweepstakes," a 408-mile (657-km) distance dog sled race from Nome, to Candle, and back. Smaller, faster and more enduring than the 100- to 120-pound (45- to 54-kg) freighting dogs then in general use, they immediately dominated the Nome Sweepstakes. Leonhard Seppala, the foremost breeder of Siberian Huskies of the time, participated in competitions from 1909 to the mid-1920s.

On February 3, 1925, Gunnar Kaasen was first in the 1925 serum run to Nome to deliver diphtheria serum from Nenana, over 600 miles to Nome. This was a group effort by several sled-dog teams and mushers, with the longest (91 miles or 146 km) and most dangerous segment of the run covered by Leonhard Seppala. The Iditarod Trail Sled Dog Race commemorates this famous delivery. The event is also loosely depicted in the 1995 animated film Balto, as the name of Gunnar Kaasen's lead dog in his sled team was Balto, although unlike the real dog, Balto the character was portrayed as half wolf in the film. In honor of this lead dog, a bronze statue was erected at Central Park in New York City.

Dedicated to the indomitable spirit of the sled dogs that relayed antitoxin six hundred miles over rough ice, across treacherous waters, through Arctic
blizzards from Nenana to the relief of stricken Nome in the winter of 1925. Endurance · Fidelity · Intelligence

In 1930 exportation of the dogs from Siberia was halted. The same year saw recognition of the Siberian Husky by the American Kennel Club. Nine years later, the breed was first registered in Canada. The United Kennel Club recognized the breed in 1938 as the "Arctic Husky," changing the name to Siberian Husky in 1991. Today’s Siberian Huskies registered in North America are largely the descendants of the 1930 Siberia imports and of Leonhard Seppala’s dogs. The limited number of registered foundational dogs has led to some discussion about their vulnerability to the founder effect. Seppala owned a kennel in Nenana before moving to New England, where he became partners with Elizabeth Ricker. The two co-owned the Poland Springs kennel and began to race and exhibit their dogs all over the Northeast.

As the breed was beginning to come to prominence, in 1933 Navy Rear Admiral Richard E. Byrd brought about 50 Siberian Husky's with him on an expedition in which he hoped to journey around the 16,000-mile coast of Antarctica. Many of the dogs were trained at Chinook Kennels in New Hampshire. Called Operation Highjump, the historic trek proved the worth of the Siberian Husky due to its compact size and greater speeds. Siberian Huskies also served in the United States Army's Arctic Search and Rescue Unit of the Air Transport Command during World War II.


Description
Coat
The Siberian Husky's coat is thicker than most other dog breeds, comprising two layers: a dense undercoat and a longer topcoat of short, straight guard hairs. It protects the dogs effectively against harsh Arctic winters, but the coat also reflects heat in the summer. It is able to withstand temperatures as low as −50 to −60 °C (−58 to −76 °F). The undercoat is often absent during shedding. Their thick coats require weekly grooming.In hot areas a husky's coat can naturally change so the dog can adapt to hot temperatures.

Siberian Huskies come in a variety of colours and patterns, usually with white paws and legs, facial markings, and tail tip. The most common coats are black and white, then less common copper-red and white, grey and white, pure white, and the rare "Agouti" coat, though many individuals have blondish or piebald spotting. Striking masks, spectacles, and other facial markings occur in wide variety. Merle coat patterns are not allowed.

Eyes
The American Kennel Club describes the Siberian Husky's eyes as "an almond shape, moderately spaced and set slightly obliquely." The eyes of a Siberian Husky are ice-blue, dark blue, amber, or brown. In some individual dogs, one eye may be brown and the other blue (complete heterochromia), or one or both eyes may be "parti-colored," that is, half brown and half blue (partial heterochromia) All of these eye-color combinations are considered acceptable by the American Kennel Club.

Nose
Show-quality dogs are preferred to have neither pointed nor square noses. The nose is black in gray dogs, tan in black dogs, liver in copper-colored dogs, and may be light tan in white dogs. In some instances, Siberian Huskies can exhibit what is called "snow nose" or "winter nose." This condition is called hypopigmentation in animals. "Snow nose" is acceptable in the show ring.

Tail
Siberian Husky tails are heavily furred; these dogs will often curl up with their tails over faces and noses in order to provide additional warmth. The tail should be expressive, held low when the dog is relaxed, and curved upward in a "sickle" shape when excited or interested in something. It should be symmetrical, and not curved or deviated to the side; nor should it ever curl so much as to touch the back.

Behavior
The Husky has been described as a behavioral representative of the domestic dog's forebear, the wolf, exhibiting a wide range of its ancestors' behavior. They are known to howl rather than bark. If the dog is well trained when it's young, it can make a great family pet. The frequency of kenneled Siberian Huskies, especially for racing purposes, is rather high, as attributed through the history of the breed in North America. They are affectionate with people of all ages. Behavioral issues include a tendency to roam and to make escape attempts.

A fifteen-minute daily obedience training class will serve well for Siberian Huskies.Siberians need consistent training and do well with a positive reinforcement training program. They rank 45th in Stanley Coren's The Intelligence of Dogs, being of average working/obedience intelligence. They tend to run because they were at first bred to be sled dogs. They were historically bred to be working and companion animals by the Chukchi people, and should always be gentle in nature. The Chukchi people use Siberian huskies to look after their children.

Health
A 1999 ASPCA publication gives the life span of the Siberian Husky as 12 to 14 years. Health issues in the breed are mainly genetic, such as seizures and defects of the eye (juvenile cataracts, corneal dystrophy, canine glaucoma and progressive retinal atrophy) and congenital laryngeal paralysis. Hip dysplasia is not often found in this breed; however, as with many medium or larger-sized canines, it can occur. The Orthopedic Foundation for Animals currently has the Siberian Husky ranked 155th out of a possible 160 breeds at risk for hip dysplasia, with only two percent of tested Siberian Huskies showing dysplasia.

Siberian Huskies used for sled racing may also be prone to other ailments, such as gastric disease, bronchitis or bronchopulmonary ailments ("ski asthma"), and gastric erosions or ulcerations.

Famous Siberians
Siberians gained in popularity with the story of the "Great Race of Mercy," the 1925 serum run to Nome, which made dogs Balto and Togo famous. Though Balto is the more famous of the two, and was the dog to deliver the serum to Nome after running the final 53-mile leg, it was Togo who made the longest run of the relay, guiding his musher Leonhard Seppala on a 91-mile journey that included crossing the deadly Norton Sound to Golovin.

This is not a real dog breeding site, it is based on a Sims 3 game.
The dogs that are displayed on this site are dogs created by EA games and Little V.
The coats are custom made and/or adjusted.

You can't buy real dogs or pups from this sites !
The dogs and pups for sale or for in-game playing.